Jurgen Klopp hailed both Liverpool and Chelsea for being ‘mental monsters’ after their epic penalty shootout in the FA Cup Final while Thomas Tuchel was ‘sad but proud’.

Liverpool completed their domestic cup sweep with another thrilling victory over Chelsea on penalties at Wembley, with Kostas Tsimikas scoring the decisive penalty after Mason Mount’s attempt to save Alisson.

Liverpool’s success affected by injuries Mohamed Salah and Virgil van Dijkwhich could hurt their hopes of an unprecedented quartet, as their pursuit of the Premier League continues on Tuesday in Southampton on Tuesday. Sky Sports And the Champions League final with Real Madrid on May 28.

Klopp said BBC Sport: “Fantastic, it was an intense and amazing match against Chelsea – they would have deserved it in exactly the same way, as in the Carabao Cup. That’s how small the margins are.

“I couldn’t be more proud of my boys, the transformation they made, how hard they fight, early changes. I think Virgil is fine, but his muscles hurt.

“All these things, missing good chances, beating good moments from Chelsea and then having really good moments.

“Then in the penalty shootout it was nerve-wracking, my nails were gone but I really feel for Chelsea. For the second time, 120 minutes and you don’t get anything, it’s very difficult. But for us I’m very happy.

Klopp pays tribute to Neuro11: This is their trophy!

Please use Chrome browser for an accessible video player 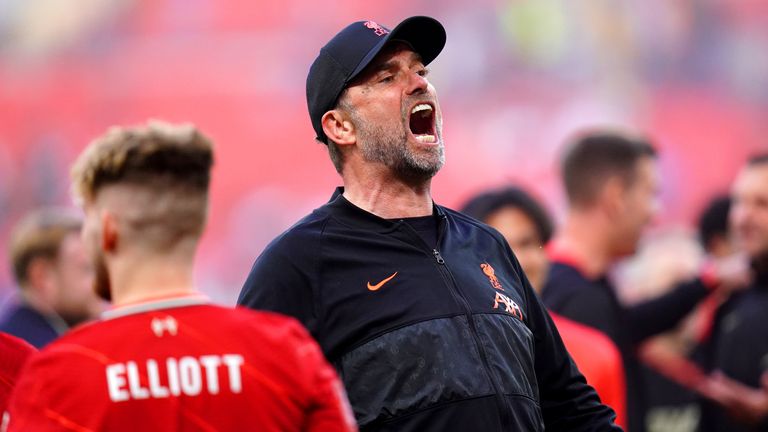 Jurgen Klopp also revealed the secret of Liverpool’s success in penalty shootouts as a neuroscience.

Klopp also revealed the secret to Liverpool’s penalty shootout success as a neuroscience.

The German Reds coach has hailed soccer neuroscientists Neuro11 as the secret weapon behind his team’s penalty acumen.

“In the end, we all know that penalties are a lottery, that is the case; but we did it again,” Klopp said. “We are working with Neuro11, four men from Germany.

“They contacted us a few years ago. They are neuroscientists and they said ‘we can train penalty kicks.'”

We said, right? This sounds interesting, come on. “So this cup is theirs, just like the Carabao Cup.”

Klopp: If City lose, I’ll start thinking about the quadruple!

Klopp insisted that sweeps of the League Cup, FA Cup, Premier League and Champions League remain on hold – mainly due to Manchester City’s dominance of the league.

Pep Guardiola’s City leads Liverpool by three points in the league, but he could double that advantage with a win over West Ham on Sunday, live on Sky Sports.

“The quartet is working if you want, but it’s also off because of the situation,” Klopp said. “City are three points ahead of this point and leading by seven on goal difference.

“And now if they win tomorrow, with all due respect to West Ham, if they win 4-0, it’s six points, before we start in Southampton on Tuesday, and we have 11 goals.

“Then we have to win both games, and they have to lose a game, which is ridiculous. So let’s see what happens tomorrow. If they lose against West Ham, I’ll start thinking. If they don’t, we’ll judge it and go from there. It’s great. Exactly that we can talk about the quartet. It’s crazy.”

Klopp dedicated a special tribute to signing Luis Diaz in January, who followed up his impressive display in the Carabao Cup final with another impressive performance at Wembley.

The Colombian caused problems for Chelsea throughout, as he attempted six shots on goal before being replaced by Roberto Firmino in extra time.

Speaking at his press conference, Klopp said: “What a boy, what a story, what a player…But he should have scored! Maybe he would agree.

“Don’t forget he played on the side [Trevoh] Chalobes and Reece James, falling into a situation like this, for the big chance he had in the first half, is unlikely.

“He should have scored in that moment, but what a player he is. He’s great. A great boy.

“He got our football 100 per cent. We thought we saw it in Porto and it really is that way. I feel lucky.

“It fits our football like a glove and that’s really, really special.”

Tuchel: Sad but proud of Chelsea

Please use Chrome browser for an accessible video player 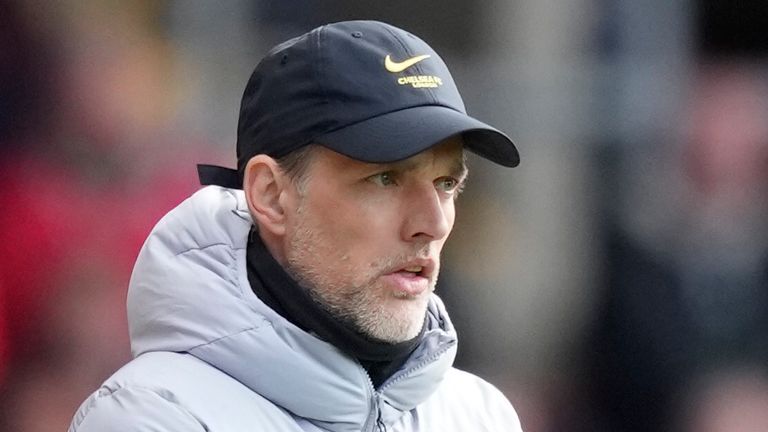 Chelsea coach Thomas Tuchel talks about Chelsea’s defeat to Liverpool, saying he is “sure” that his team will win

You can see what he meant for Tuchel during the penalty shootout as his feelings of desperation to joy and back to despondency were clearly visible. Despite the defeat, the German could not blame his players for their effort and ability to lead Liverpool all the way.

He said: “As it happened in the final, in the Carabao Cup, I have no regrets. I told the team that I was proud.

“We were sure we would be competitive and make life very difficult for Liverpool. We did it again. We struggled in the first 15 minutes but after that we were excellent throughout the game.

“We got to zero against perhaps the best attacking team in the world and we also created a lot of chances. We deserved it, because they also deserved it, but again we lose on penalties.

“We are very disappointed, of course. We are sad but at the same time proud.

“I was sure we would win today. I was sure before and I was sure during the match that the momentum was on our side. I was sure until the last minute but unfortunately I wasn’t right.

“I have to digest it and carry on with it. That is life in sport.

“We have everything it takes to win trophies, we’ve proven it. We have the Club World Cup and the European Super Cup and I don’t regret it because that was at the beginning of the season and in the winter.

“We were good in the Champions League, strong in both domestic cups, we can give our best performances and we have the mentality in the club to shape the mentality of the players, but Manchester City and Liverpool have shown that you need this consistently.”

May 17 Southampton (A) English Premier League, live on Sky Sports